In CasterBlaster we embody the character of an adventurer who goes through and abandoned mansion, which is in a forest, since his mission is to reach the mountains and this route is supposed to be the fastest, but not everything will be as simple as it seems...

The game will divide into 3 levels:

In the first level, it will be like a first contact with the game, only the space button will be used and your mission is to avoid the obstacles and manage the super speed, because it will not be unlimited, the objetive of this first level will be to reach the gate of the mansion.

The second level, you will have to use the keys that will be on the screen to teleport to them, and thus be able to dodge the turrets that will be in the mansion, the mission of this level will be to survive until time runs out, once you get it you will advance to the next level.

The third and last level will be a game in which you will hace to use the microphone to guide the player to the exit of the mansion, while dodging the turrets.

The components of the team are: 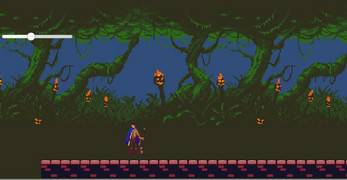